Château d'Yquem is a Premier Cru Supérieur wine from the Sauternes, Gironde region in the southern part of the Bordeaux vineyards known as Graves. In the Bordeaux Wine Official Classification of 1855, Château d'Yquem was the only Sauternes given this rating, indicating its perceived superiority and higher prices over all other wines of its type. Yquem's success stems largely from the site's susceptibility to attack by "noble rot" (a particular kind of infestation by Botrytis cinerea).

Wines from Château d'Yquem are characterised by their complexity, concentration and sweetness. A relatively high acidity helps to balance the wine's sweetness. Another characteristic for which Château d'Yquem wines are known is their longevity. With proper care, a bottle will keep for a century or more. During this time, the fruity overtones will gradually fade and integrate with more complex secondary and tertiary flavours.

Ramon Felipe Eyquem had made a fortune as a herring and wine merchant and had bought the estate in 1477 from Guilhem Duboys, seigneur de Juillac. Pierre Eyquem, Seigneur of Montaigne, had been the mayor of Bordeaux. His son Michel Eyquem de Montaigne died in 1592. Château d'Yquem was acquired by Jacques de Sauvage in December 1593. De Sauvage acquired the property from the French monarchy by exchanging other lands that he owned for what was then referred to as the 'House of Yquem'. The site has been home to a vineyard since at least 1711 when the estate became fully owned by Léon de Sauvage d'Yquem. In 1785 it passed to the Lur-Saluces family when Françoise-Joséphine de Sauvage d'Yquem married Count Louis-Amédée de Lur-Saluces, a godson of Louis XV and Lady Victoire de France. Monsieur Lur-Saluces died three years later, and his wife subsequently focused her energy on sustaining and improving the estate.

While Minister Plenipotentiary to France, Thomas Jefferson visited the château and later wrote, "Sauterne. This is the best white wine of France and the best of it is made by Monsieur de Lur-Saluces." Jefferson ordered 250 bottles of the 1784 vintage for himself, and additional bottles for George Washington. However, at that time the technique of allowing noble rot to infect grapes had not yet been discovered, so the wine Jefferson was drinking was a different sweet wine.

The 1811 Château d'Yquem, a comet vintage, has exhibited what wine experts like Robert Parker have described as exceptional longevity with Parker scoring the wine a perfect 100 points when tasted in 1996. 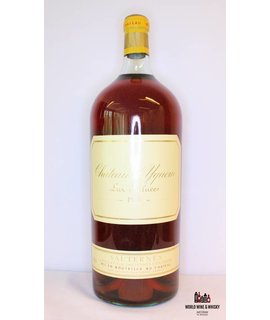