The estate Château Ducru-Beaucaillou was purchased by Francois Borie in 1941 and has remained in the family since then. The family also owns other estates, Château Grand-Puy-Lacoste and Château Haut-Batailley. In the mid-1980s the estate battled an infestation of TCA in their cellars that marred several vintages including the 1988, 1989, and 1990. The Chateau has since corrected the problem, and today the wines are fermented and aged in a new underground cellar created in the late 1990s. Today the estate is managed by Bruno Borie.

Ducru-Beaucaillou's vineyards consist of 50 hectares of well drained gravel with stones up to 2.5 inches in diameter. (Beaucaillou means beautiful stones.) The vineyards are planted in Cabernet Sauvignon (70%) and Merlot (30%), with previous planting of Cab Franc and Petit Verdot having been uprooted. The vines' average age in 2005 was 38 years.

Ducru-Beaucaillou produces two wines. The grand vin called Château Ducru-Beaucaillou, and a second wine produced since 1995 to which lesser-quality lots are relegated, La Croix de Beaucaillou. The wines are aged for 18 months in 50% to 80% new oak barrels according to the richness of the vintage, fined with egg whites, lightly filtered, and then bottled. 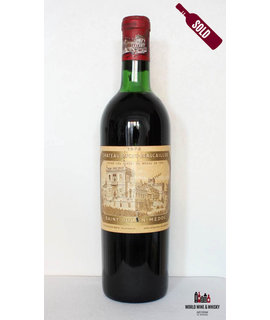