G. H. Mumm & Cie, situated in Reims in northern France, is one of the largest Champagne producers and it is currently ranked 4th globally based on volume of bottles sold in 2015.

It was founded by three brothers, Jacobus, Gottlieb and Phillip Mumm, German winemakers from the Rhine valley and G. Heuser and Friedrich Giesler on March 1, 1827 as P. A. Mumm Giesler et C°. P.A. stood for the initials of Mumm senior (Peter Arnold Mumm), a successful wine merchant from Solingen. Mumm's label is famous for its red ribbon (Cordon Rouge), patterned after and resembling the French Grand Cordon of the Légion d'Honneur.

The French confiscated all of the Mumm's property, although they had lived in Champagne for almost a century before World War I, because they had never become French citizens.

The company is owned by Pernod Ricard.

In 1964, René Lalou, the head of the Mumm Champagne House, and Léonard Foujita (1886–1968), a Japanese painter belonging to the Ecole de Paris school of art, decided to build a chapel in the gardens belonging to the Champagne house. Begun in 1965, the Foujita chapel was entirely designed by Foujita in the romanesque style, who drew the plans and designed the ironwork, stained glass and sculptures. He supervised the building and interior decoration. The chapel is decorated with frescos, remarkable for their freshness, soft lines and curves inspired by oriental art, in colours of blues, golds, yellows and greens, as well as very subdued reds verging on brown. The chapel was consecrated on 1 October 1966 and handed over to the City of Reims on 18 October 1966. The chapel was designated an historic monument in 1992.

Foujita also gave G.H. Mumm a fresco depicting "The Virgin in the Vines". The rose featured in the painting became the cuvée's emblem and appears on the metallic cap on top of the cork of the rose Champagne. 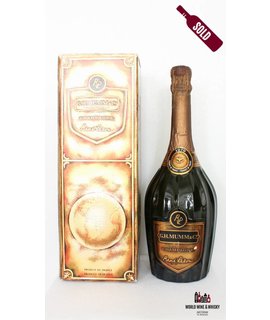