Krug Champagne is a Champagne house founded by Joseph Krug in 1843. It is based principally in Reims, the main city in France's Champagne region and is one of the famous Champagne houses that formed part of the Grande Marques. Today the house is majority owned by the multinational conglomerate LVMH Moët Hennessy - Louis Vuitton S.A. whose portfolio includes other well known wine brands such as Moët & Chandon, Veuve Clicquot, Château d'Yquem and Ruinart. Despite LVMH's majority ownership, the Krug family is still actively involved in all the key decisions of the house but does not manage the day-to-day operations.

Joseph Krug founded the House of Krug in 1843. He was born Johann-Joseph Krug, a butcher's son, in Mainz, on the Rhine, in 1800, at a time when the city was part of the Napoleonic Empire. Having dispensed with the name Johann, he left Mainz in 1824 and by 1834 he was in Paris. Germans were then much in demand in France as accountants and book-keepers and, as such, Joseph joined Champagne Jacquesson in Châlons-sur-Marne.

He spent eight years with Jacquesson, with his work taking him beyond accountancy as he went on the road around Europe testing the market and assessing criticism from wine sellers and customers. He learned about composition and taste so that by 1840 he already seems to have been blending Champagne for at least one other house. In 1841 he married Emma-Anne Jaunay, the daughter of a French hotelier based in London's Leicester Square, and an English mother. The following year their son, Paul Krug, was born. In 1842 came the move to Reims and, following a year of negotiations, Krug et Cie. was founded in 1843 with sleeping partner Hyppolite de Vivès. Joseph was also fluent in French, English and German and spoke some Russian, putting the company in position to exploit key overseas markets.

Joseph died in 1866 and was succeeded by his son Paul Krug, who had been trained by his father for the business in France and abroad. Joseph had laid the foundations and under the supervision of Paul the House was established as a grande marque. By the 1880s the prestige of Krug was acknowledged in the United Kingdom, then the primary overseas market for Champagne. In 1866 the House moved into the premises in Rue Coquebert, in Reims, that it still occupies.

After Paul's death in 1910, he was succeeded by his son, Joseph Krug II. However, during World War I Joseph II was taken prisoner and his wife Jeanne played a key role in the House, at a time when the Western Front divided the region between the Allies and the Germans. After the war, Joseph II's slow recovery led to his nephew Jean Seydoux becoming joint manager in 1924. In that decade, too, the Krug 1926 and 1928 vintages were created, which have been considered by critics to be amongst the greatest Champagnes. The lawyer and wine writer Maurice Healey observed in 1940 that "Krug holds my allegiance as the king of them all; my recollection does not go beyond the Krug 1919, but that was truly an excellent wine. And Krug 1928 must be the best wine made in the present century."

By the mid-1930s, Paul Krug II, the son of Joseph II, was active in the business and would go on to become head of the House from 1959 to 1977. His father only died in 1967, by which time he was, according to Patrick Forbes, "one of the most popular and respected figures in the Champagne district".

In 1962 Henri Krug, the son of Paul II, joined the management, as did his brother Remi three years later. Their arrival was followed by a series of innovations, including extensions in the range of Champagnes. In 1979, for the first time, a graduate winemaker joined the House. In January 1999 the House became part of LVMH and by 2007, the brothers, while remaining on the tasting committee, had stepped down from day-to-day responsibilities. In 2009 Olivier Krug, the son of Henri, became House director. 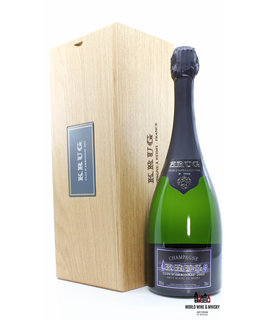